This year’s Coachella Music & Arts festival in Indio, Calif. was one for the books. Regardless of if you were there or not, we learned that Leonardo DiCaprio has some questionable dance moves in his playbook, that Lorde’s stage repertoire appears to mirror mid-2000s Kanye West, and that the Haim sisters have always been cool (they admitted to hopping the festival fence since 2004 during their set).

Celebrity habits aside, both weekends of the festival revealed some interesting trends in young adult culture.

Weekend one of the festival was plagued by a dust storm for the second year in a row, causing quite an uproar. Among the disgruntled attendees was former High School Musical actress, Vanessa Hudgens.

The actress complained about the dust storm via Instagram by taking a photo of her “bindi mark.” Bindis, traditionally worn by Hindu women, are a religious symbol of wisdom and can signify age, marital status, and religious background.

As soon as media sources were aware of Hudgens’ cultural faux pas, they began criticizing her for disrespecting Indian culture and not knowing about cultural appropriation. But she didn’t seem to mind. Following her controversial Instagram post, Hudgens donned a Native American headdress and even more bindis (even matching with her sister). One Instagram user, @lenadanya, commented on Hudgens’ post:

I’m not Native American, but it makes me uncomfortable to see these beautiful headdresses that have powerful history and meaning used as fashion statements. I can’t figure out if people are truly unaware that a mass genocide was committed  against Native Americans on their own land in their own homes… Or do they really choose to ignore it?

The critical commentary didn’t seem to affect Hudgens, as she continued to post pictures at the festival with friends and family.

Kendall and Kylie Jenner were also popular at the festival, hanging out with Selena Gomez and company, and reducing the standard festival uniform to a science. Kendall decided to put a spin on her wardrobe during day two of the festival with an enormous Indian style nose ring. 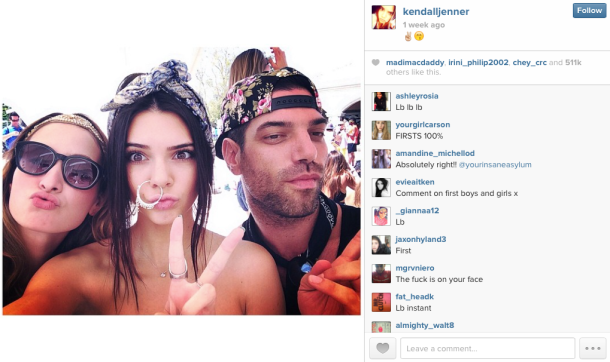 These rings are usually seen as a part of traditional Indian weddings, where the bride is layered in fabric and jewelry. Jenner’s move didn’t cause as much of a stir as Hudgens’ did, but it’s still interesting that these significant cultural emblems are finding their way into mainstream young adult culture. What will be next?