Every year, early October rolls around and pumpkins pop up on sidewalks and stoops, costumes appear on hangers in party and thrift stores alike, and the lineup for Seattle’s annual Deck The Hall Ball festival is released. The rosters for the past two years have both been admirable and attracted large audiences. This year isn’t so promising. 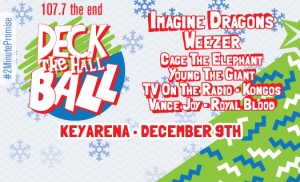 In the age of third-wave feminism, the lineup for this year’s festival managed to be completely male. I’m not just saying that there aren’t any front women of bands, I’m saying there is not one female drummer, guitarist, or even back-up vocalist. The scheduled bands are Weezer, Imagine Dragons, Cage the Elephant, Young The Giant, TV On The Radio, Kongos, Vance Joy, and Royal Blood. All of them have released albums within in the past year, with the exceptions of Cage the Elephant’s Melophobia in 2013 and Kongos’s Lunatic in 2012.

But it’s impossible that this male-centric lineup is solely due to relevance. 2014 has seen what may be the best year for releases by women in music. Warpaint, Dum Dum Girls, Katy B, Angel Olsen, Phantogram, St. Vincent, MØ, Kylie Minogue, Jenny Lewis, Foxes, Lykke Li, Tori Amos, Cher Lloyd, Karen O, Jessie Ware, and First Aid Kit are all either female solo artists or bands with front women who have released albums this year alone. The kicker is, is that that’s not even half of the list. Not to mention women in the local music scene, like Tacocat, Cumulus, and Jen Ghetto.

At the rate things are going, it seems like the people over at 107.7 The End who host the event at Key Arena each year had to deliberately try to not book bands with women in them. If it happened to be purely an accident, not only is that difficult to believe, but I bet most of the seats at this year’s Deck The Hall Ball are going to be filled by men.

In light of Ariel Pink’s misogynistic remarks, Meredith Graves’s essays, Grimes’s tweets, and even Kesha’s alleged abuse by her long-time producer, it’s pretty terrible timing for a line-up like this to emerge. Looks like it’s one step forward and two steps backwards for women in the music industry.