It has taken me a few days to settle down from the Gilmore Girls mania of this past weekend. On Saturday, June 6, in Austin, Texas, at A Television Experience, or ATX Festival, Gilmore creator Amy Sherman-Palladino joined Gilmore girls Lauren Graham, Alexis Bledel and Kelly Bishop and a large part of the rest of the cast for a reunion panel.

The panel, sponsored by Entertainment Weekly, was not streamed live, unfortunately, but EW put it up Sunday for fans who weren’t able to make it to ATX. Much to the disappointment of fans, though, EW originally only put up 48 minutes of the panel, which went well over an hour. After being understandably and justifiably harassed on Twitter, EW came back with the full-length panel and the extra “Coffee with Amy” interview with show creator Sherman-Palladino.

I’ve wanted to write about Gilmore Girls and honor its place in my heart (I’ve proudly seen the entire series five times through) for a while, and with the events of this past weekend, now seemed like a good time to do so.

Before the Gilmore reunion panel started, the two women executive directors introduced themselves and briefly shared their personal connections with Gilmore Girls.

“Gilmore Girls has been on our list [since] four years ago,” said executive director Caitlin McFarland.

McFarland and Emily Gibson founded the festival four years ago.

“We started this festival four years ago from a pure love of television and storytelling,” Gibson said. She said she and McFarland wanted to focus on shows that weren’t being given recognition. Gibson also said they knew a big part of the festival was going to be reunions, and Gilmore Girls has been their biggest yet.

McFarland said she and Gibson both grew up with the show and that her mom sent her VHS tapes of Gilmore Girls when she was in college.

One by one, they introduced the girls: Sherman-Palladino, Graham, Bledel, and Bishop. After about an hour of answering questions about how they auditioned, how Sherman-Palladino came up with the show, how Bledel struggled at first (this was her very first acting gig after modeling to support herself through school), and more, they took a short break to show a tribute to Edward Herrmann, otherwise known as Richard Gilmore, the patriarch of the show. Sherman-Palladino put the tribute together herself. Hermann died of brain cancer on New Year’s Eve last year. Sherman-Palladino said he was actually the first of the cast to say he wanted to do the ATX reunion panel.

With an awkward jump (EW can’t show the tribute because of copyright reasons), the rest of the cast came up on stage. Everyone from Jared Padalecki (Dean) to Keiko Agena (Lane) to Milo Ventimiglia (Jess) to Scott Patterson (Luke) was there. Missing was Melissa McCarthy, who since her adorably quirky days as Sookie has exploded into stardom. There was no mention of her at all, even when Jackson Douglas (who plays Sookie’s husband in Gilmore), hypothesized where his character would be today. 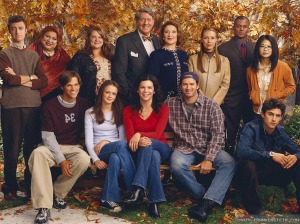 If seeing the cast together wasn’t nostalgic enough, signs like “Kim’s Antiques” and “Stars Hollow” from the show’s set hung above them, making watchers feel like a show reboot was closer than ever. Sherman-Palladino, though, definitively said nothing was in the works, despite Patterson’s remarks a few weeks ago. She did say that everyone still gets along though. When asked if she would want to do a reboot and finish the series her way (she didn’t come back for season seven because of network disputes), Sherman-Palladino said it would have to be the right time and format and budget. But Graham agreed that she would be onboard for a reunion.

As was only necessary, the moderator, EW Morning Live host Jessica Shaw, asked Rory’s (Bledel) onscreen boyfriends which team they were on: Dean, Jess, or Logan. Padalecki and Matt Czuchry (Logan), both said they were team Jess, but Ventimiglia said he was team Dean and even added that “Logan was a dick.” He was not, by the way. Well, OK, sometimes. But I think we all know Rory should have ended up with Logan.

But Patterson said what a lot of us were thinking: “None of you are good enough for Rory.” Patterson, who played the protective father figure of Luke, got fans excited a few weeks ago when he went on the Gilmore Guys podcast and said there were talks of a show reboot. As Patterson said, “It went viral.”

The Gilmore Guys podcast started last fall and has blown up since. Co-hosts Kevin Porter (who grew up with the show and loves it) and Demi Adejuyigbe (a first-time watcher who has grown to love the show) go episode by episode and often welcome guests and cast members to discuss the show with them.

The podcast and the recent ATX panel are proof of a new generation of Gilmore Girls fans. With its arrival to Netflix last year, younger people are watching the show and falling in love with it.

Gilmore Girls’ following is a devoted, cult-like group. The show isn’t flashy or drama-filled. But it’s not quite real, either. Towns like Stars Hollow aren’t common. Gilmore Girls wasn’t known for its marvelous filmmaking or its dizzying direction. It wasn’t heralded for its big stars or its constant tear-inducing storylines. It was simply a show about the Gilmore girls. It was about Lorelai and Rory, Rory and Emily, and Lorelai and Emily.

Gilmore Girls defined “home” for me.

I always kind of knew what home was. Home was being with my family and feeling comfortable. But before I started my ritualistic watching of Gilmore, I didn’t know home could exist elsewhere.

I started watching the show because I was 16 and my heart had just been broken by a boy for the first time. I didn’t know what I needed, but I knew I needed to feel “home,” and nothing was doing it for me. I had seen chunks of seasons when I was younger since the show was on the CW/WB and ABC Family, and I figured it would be a good time to watch from the beginning. So I went to the public library and rented season one.

The show warmed me. It didn’t make me forget my heartbreak, but it did become a companion to me as I dealt with it. I ritualistically watched all seven seasons (yes, even the Sherman-Palladino–less season seven) and have continued to rewatch on a loop since.

Netflix, podcasts, reunion panels and more have allowed us to surround ourselves in the nostalgia of the 2000s. We get to relive an old show. We get to be Gilmore Girls again.

Kelly Pantoleon is a graduate of Seattle Pacific University, where she served as Copy Editor for the student newspaper. Aside from watching Gilmore Girls, her interests include listening to Father John Misty and watching Seattle sports teams win. Her Twitter handle is @kalp___, or reach her by email at kellypantoleon@gmail.com.